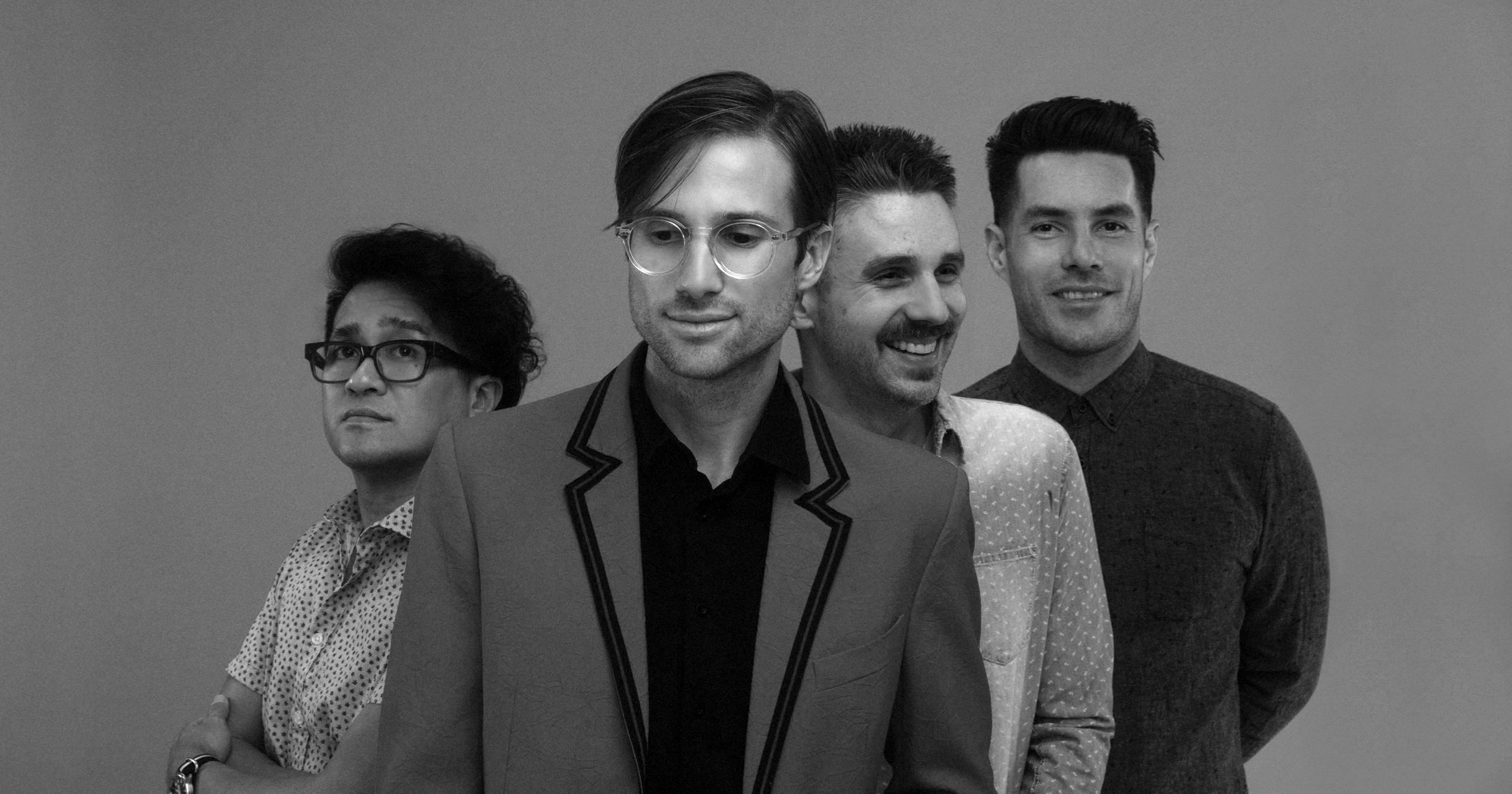 Since breaking through with their smash single “My Type,” Saint Motel have brought a certain cinematic sensibility to their music, endlessly luring the audience into a world more charmed and dazzling and glamorous than real life. On The Original Motion Picture Soundtrack—a multi-part project split among three EPs—the Los Angeles-based band expand upon that elegant world-bending, dreaming up their own epic movie in album form. As its songs cycle through stories of love and danger and impossible triumph, The Original Motion Picture Soundtrack emerges as Saint Motel’s most dynamic body of work to date, fantastically escapist yet undeniably charged with tremendous feeling.

The follow-up to their sophomore effort saintmotelevision—a 2016 release featuring the hit single “Move”—The Original Motion Picture Soundtrack embodies an opulent sound true to its ambitious scope. Co-produced by frontman A/J Jackson and Grammy Award-winner Mark Needham (The Killers, Dolly Parton, Chris Isaac), the album continues the Saint Motel custom of joyfully blurring genres, bringing in elements of everything from symphonic pop to big band to ’70s AM soft-rock. In creating that sonic palette, the band approached the recording process with a spirit of playful innovation (e.g., mic’ing up metal furniture and band members’ bodies), even as they embraced more traditional instrumentation (including contributions from several Thai musicians brought in by bassist Dak Lerdamornpong). “We spent a lot of time experimenting with different tones and sounds, and finding those subtle details that give the music an unexpected feeling,” says Jackson. “It was fun to tear everything apart sonically, then put it back together in a way that makes it all feel grandiose.”

On the opener to The Original Motion Picture Soundtrack, Saint Motel present a perfect introduction to the album’s shapeshifting splendor. Born from a Sunday afternoon writing session in the San Gabriel Mountains (where Jackson spent two months on a solo writing retreat), “Old Soul” unfolds as a hypnotic piece of orchestral pop, sweetly conjuring a bit of lovesick reverie. “I came up with these jazzy chords that had a timeless feeling to them, and it inspired the idea of a timeless romance—the kind where the more you get to know someone, the more you feel like you’ve known them your entire existence,” Jackson notes.

Another cut from The Original Motion Picture Soundtrack, Pt. 1, “Van Horn” slips into a mood of romantic frustration, the track’s heady tension magnified by slinky rhythms and spaghetti-western guitar tones. As Jackson recalls, the song took shape after Saint Motel spent a strange autumn day wandering the streets of Van Horn, Texas. “We were there on Halloween and were already getting pretty weird on our own, and being in Van Horn very much amplified that feeling,” says Jackson. “There’s a lot of falling-apart, Old West-style façades and relics from when it was a locomotive town, and being there left some sort of imprint on us.”

On “Preach”—the gloriously upbeat lead single to The Original Motion Picture Soundtrack, Pt. 2—Saint Motel let their more soulful side shine. A tribute to powerful women everywhere, the groove-heavy track centers on a particularly stirring vocal performance from Jackson. “I was messing around with the vocals, trying to sound like Prince, just to have fun,” he says. “It wasn’t my intention to go in that direction—I was definitely channeling something.”

Throughout The Original Motion Picture Soundtrack, Saint Motel prove their talent for turning sudden bursts of inspiration into gracefully sculpted pop songs. In the making of “Sisters,” for instance, Jackson followed through on an idea sparked from turning on the radio and hearing a tune from the Shepherd Sisters. Featuring a sample from the mid-’50s female vocal group, the track arrives as a loopy but lovely homage to Jackson’s own sister, tenderly steeped in teenage memory (e.g., “You showed me marijuana/And what good rock-and-roll could be”). And on “Snake Charmer”—a track from the forthcoming The Original Motion Picture Soundtrack, Pt. 3—Saint Motel share a song whose origins trace back to Jackson’s recent trip to Morocco. “I was there on my birthday, and we were hanging out with a snake charmer who came from a long line of snake charmers,” says Jackson. “He got us into a club and told the band it was my birthday, and we were trying to find a song for them to play and me to sing. I asked if they knew any David Bowie or Talking Heads or Strokes, but they mostly only knew European dance songs. I decided then that I was going to make a song big enough to be known in that world, so I could come back and impress my snake-charmer friend.”

An album blissfully distanced from everyday life, The Original Motion Picture Soundtrack partly owes its untethered quality to Jackson’s secluded creative process. “I wanted to see what would happen if I put some degree of constraint on my songwriting,” says Jackson, who wrote much of the album at a house in the mountains of Monrovia, a small city east of L.A. “It ended up being so peaceful, with lots of wildlife around and no real distraction. I’d write during the day and leave everything behind at night, then come back and approach it fresh the next morning.” When it came time to record, Saint Motel laid down most of the album in a prolonged session with Needham. “In the past we’ve split everything up between different studios and co-producers, but we did the bulk of this one in the same time and space,” says Jackson. “I think it helped us to settle in and relax, and experiment as much as we wanted to.”

Founded by Jackson and guitarist Aaron Sharp—film-school classmates with a shared appreciation of obscurist cinema—and later rounded out by Lerdamornpong and drummer Greg Erwin, Saint Motel first revealed their imaginative take on alt-pop with their 2009 debut EP ForPlay. The band soon amassed a devoted underground following, thanks in part to a series of “experiential concerts” with such themes as Zombie Prom and Judgment Day, then found breakout success with their critically acclaimed 2012 debut album Voyeur. After signing to Elektra Records, Saint Motel saw their fanbase grow exponentially with the release of My Type EP, a 2014 effort whose platinum-certified title track became a top 10 alternative radio hit. In 2016, they flipped the script once again with saintmotelevision—a first-of-its-kind full-length accompanied by virtual music videos for all ten of its tracks, making it the world’s first-ever virtual-reality album. In addition to touring with acts like Arctic Monkeys, Imagine Dragons, Band of Skulls, and Weezer, Saint Motel have also spent much of the last half-decade bringing their captivating live show to leading festivals like Coachella, Lollapalooza, and Bonnaroo.

As Saint Motel’s most immersive offering yet, The Original Motion Picture Soundtrack ultimately leaves it to the listener to insert their own story into the album’s loosely woven narrative. “There’s a challenge and a false victory, a love interest and that dark moment where everything seems hopeless and lost, and then the final showdown and the chance to come out victorious,” says Jackson in tracking the album’s many twists and turns. “We’d love it if it had the same effect as a great movie, where you feel a part of the adventure. And just like the hero, you come out of the journey a new version of yourself, a version shaped by what you encountered along the way.”